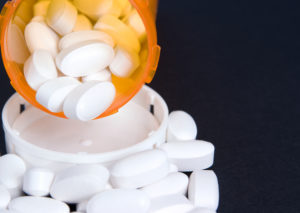 Paracetamol (an aniline analgesic) and NSAID’s (non steroid anti inflammatory drugs) are considered to be safer than opioids, “bearing a low risk of addiction, tolerance, dependency and withdrawal”. However, when paracetamol is used in combination with weak opioids, there is said to be an increased frequency of “rebound headaches”, that are also known as medication overuse headaches.

The occurrence of side effects with paracetamol use is high because paracetamol has a narrow therapeutic index – which means the therapeutic dose is close to a toxic dose. People using prescription medications and or over the counter pain killers need to be aware of the total paracetamol content of the drugs they are taking to avoid accidental overdose. Paracetamol may have an antidepressant effect, as a study has shown paracetamol to increase availability of the antidepressant serotonin in rats, but this is not tested in humans

There are many people who consider that they are or have been addicted to taking paracetamol. Paracetamol withdrawal effects include irritability, anxiety and painful symptoms that mimic the original condition that the medication was taken to relieve. Any drug that has both toxicity and a “reward” effect, such as providing pain relief, has a capacity to become addictive.

The recommended treatment for withdrawal effects such as rebound headaches is to simply cease taking the medication, and put up with the discomfort, until symptoms of pain naturally subside. This recovery treatment is no different in principle to detoxing from any drug that has become tolerated and produces painful withdrawal symptoms. Serotonin depletion and resulting feelings of depression could be a further side effect of paracetamol withdrawal.

Given that intense withdrawal symptoms are commonly reported, it would seem that paracetamol can be addictive. If as manufacturers claim, physical addiction risks are minimal, then it is possible that a psychological component accounts for people feeling upset and in need of more medication with paracetamol withdrawal.

People can become psychologically addicted to any activity that produces relief from emotional stress and tension, including prescription drugs. Often the idea of “taking something” is part of what gives relief to people when they are suffering pain of any kind. Paracetamol will automatically provide relief from symptoms of emotional pain at the same time as it reduces symptoms of physical pain.

Hard drugs and narcotics get people’s attention but addiction to non narcotic pain killers is just as much a problem. The risk of fatal liver damage is an issue when abusing paracetamol. People addicted to paracetamol are in need of urgent drug addict help.

Withdrawal from any addiction is something best not done on your own. Drug addict help from comprehensive therapeutic programs can get you clean of the drug, and provide support and help to really improve your life. Part of the risk if you continue to abuse drugs such as paracetamol is that one day you might be tempted to seek out something stronger.

CONTRIBUTOR TO THIS ARTICLE